[Editor’s note: I thought of creating this section while going to work on July 3, 2003, and looked online for background information about the equestrian Chris Evert, only to find an article was actually in that day’s morning paper!! The 30-year old champion horse, Chris Evert, had been euthanized that very day due to the infirmities of old age. I am writing about this because the synchronicity of this is well beyond any realm of pure coincidence: more like a horse-hoof kicking at the gates of her stall. I feel very strongly a sense that this champion filly indeed wanted to be included on the Chris Evert website, as a little “Don’t Forget About Me, Too!” reminder of her fine accomplishments, being one so-named after the tennis legend. So, here she is! Warm thanks to photographer Barbara Livingston for allowing me the privilege of using this image for the site, from her personal collection.]

Says Barbara, “Her nose is longer than the original Chris Evert, and by this age she didn’t move around a court too quickly…but the equine Chris Evert was still a beauty. This was taken in 1998 at Three Chimneys Farm, Midway, KY, when the horse was 27.”

There was a Chestnut filly foaled in 1971, owned by a man named Carl Rosen, who made sportswear for the then-young tennis sensation Chris Evert. So high were his hopes for the prospects of breeding a champion from the noble physique of this filly, that he named the horse Chris Evert. Perhaps the horse sensed the great potential her owner saw in her, and simply lived up to the expectations, but no matter the case, she did not let him down.

Trained by Joe Trovato, equestrine Chris Evert became a leading juvenile in 1973, winning 4 of 5 starts, including the Demoiselle Stakes and the Golden Rod Stakes.

And the filly proved she was more than just a flash of light, but a shining star.

Chris Evert went on to be a champion, who most notably won New York’s prestigious filly Triple Crown, “The Triple Tiara”, in 1974, her championship 3-year-old season. She was one of only 8 fillies to ever sweep the Triple Tiara! [It is interesting to note that 1974 was also the year that non-equine Chris Evert won the most matches in her entire career and became #1 in the world.]

Meanwhile, equine Chris Evert also put together a remarkable campaign as the nation’s top female that year, capturing the three Triple Crown Grade 1 races – the Coaching Club American Oaks, Mother Goose Stakes, and Acorn Stakes, as well as finished second in the Alabama Stakes and third, against colts, in the Travers. Chris Evert went on to be a champion, who most notably won New York’s prestigious filly Triple Crown, “The Triple Tiara”, in 1974, her championship 3-year-old season. She was one of only 8 fillies to ever sweep the Triple Tiara! [It is interesting to note that 1974 was also the year that non-equine Chris Evert won the most matches in her entire career and became #1 in the world.]

But she is perhaps best remembered for a highly notable race that year which took place on the West Coast called the Hollywood Special Stakes. It was a $350,000 match race against Miss Musket at Hollywood Park, for which owner Carl Rosen and Aaron Jones, the owner of Miss Musket, each put up $100,000 with another $150,000 added to the pot by Hollywood Park. (Sounds a lot like ‘Holiday Park’ where Chrissie grew up playing tennis!) 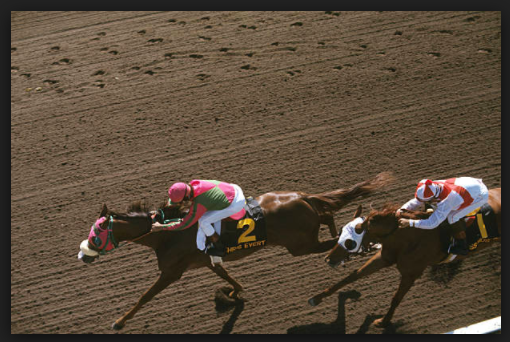 This helped make her the top money-earner in all of racing, colt or filly, for that year, sandwiched in between some pretty legendary names in Secretariat and Foolish Pleasure (who beat the most famous filly of the 20th century, Ruffian, in one of the most historic races ever run!)

At 4, Chris Evert won La Canada Stakes, a Grade 1 race, and then retired from racing with a career record of 10 wins from 15 starts, as well as two seconds and two thirds, with earnings of $679,475. She finished in the money in all but one of her 15 starts.

She was inducted into the Horse Hall of Fame in 1988, the same year tennis star Chris Evert won her final tournament in professional competition.

As a broodmare, Chris Evert produced two stakes winners, Six Crowns and Wimbledon Star, as well as the stakes-placed filly Tournament Star. All five of Chris Evert’s daughters continued the mare’s stakes-producing influence by becoming either the dams of second dams of stakes winners themselves. Six Crowns was the dam of champion Chief’s Crown.

Hilariously, Chrissie was in fact born in the Chinese Zodiac Year of the Horse. The zodiac consists of a 12-year cycle, each year in the cycle being named after an animal. According to Chinese folklore, people share the characteristics of their birth year animal, so Chrissie should in theory share some equestrian qualities. Come to think of it, she WAS one of the all-time great come-from-behind winners, often galloping to the end of the match with a swift sweep of games! And Chrissie was a remarkable front runner…There were very few occasions in her 20 year career when she actually blew a lead (and yet, more than any other player, she consistently erased tremendous leads gained by her opponents)! And let us not fail to mention, she was also one of the tour’s quickest sprinters across the court!