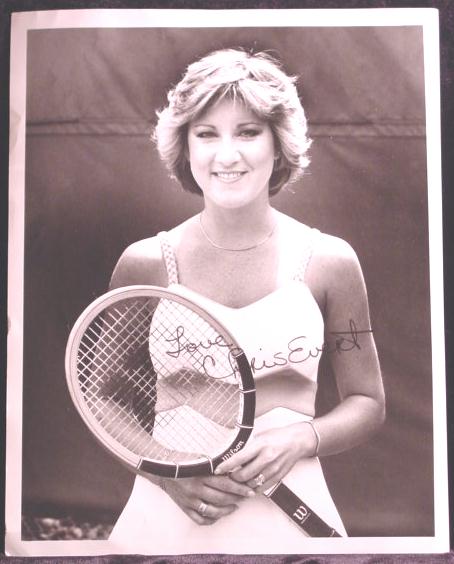 THE EVERT MUSEUM of  CHRISEVERT.NET brings you various Evert odds & ends to view from her career, as well as classic photos & articles of classic times.

A Rose Is A Rose, By Any Other Name… 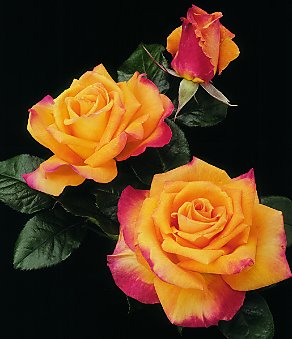 Did you know?? There is a special rose named after Chrissie Evert?

In fact, Chrissie was involved in the selection of her hybrid that’s described as “cantaloupe-orange that blushes to red.”

Commenting on the honor of having a flower named after her, Chrissie said, “When I heard that Elizabeth Taylor and Audrey Hepburn had roses named after them, I felt that I was in great company.”

THE TENNIS BRACELET… NAMED AFTER CHRIS!

It’s not often that a piece of jewelry is named for an accident, but such is the case with tennis bracelets. Tennis bracelets got their unusual name from an incident involving Chris Evert during a US Open match in 1978, the year the tournament moved from Forest Hills to Flushing Meadows. Chris had been wearing an expensive bracelet featuring an inline string of individually-set diamonds. When the clasp snapped, she asked the officials to stop the match until the jewelry could be found. When she walked off the court for her interview, she was asked about it, and matter-of-factly said, “Oh, that was my tennis bracelet.”

Since that day, bracelets featuring an inline array of diamonds have been called Tennis bracelets, and they are popular accessories for formal occasions due to their luster and sparkle. 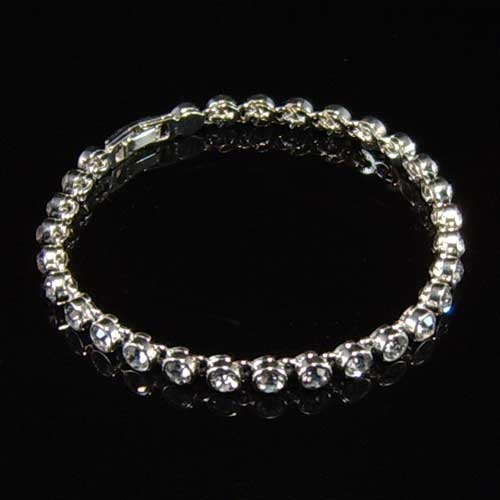 :The Art of Evert:

How many tennis players have entered mass popular consciousness enough to be featured ‘superstars’ in the fine art world? Answer: 1.

Chrissie’s star power attracted the celebrity fetish of pop art icon Andy Warhol, along with 9 other ‘sports superstars’ – including Muhammad Ali, Kareem Abdul-Jabbar, Jack Nicklaus, & Pelé, as part of the artist’s Athletes Series, 1977-1979. The below polaroid shot was taken at Andy Warhol’s Factory in New York City & was among the pics that Warhol snapped for what became the silkscreen painting of Chrissie (Painted in 1978) in the series. 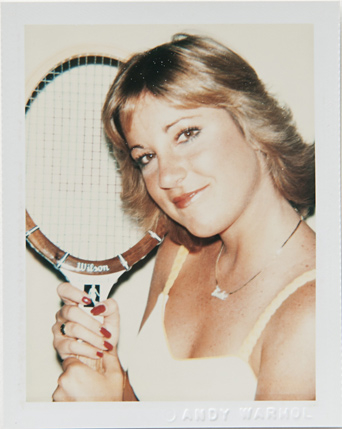 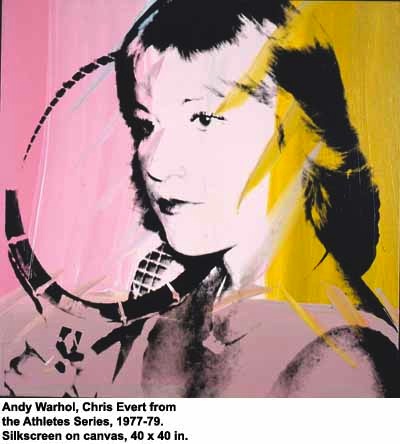 Here is the mural with all the past Wimbledon champions which is at the entrance for the Wimbledon Museum and the old entrance for centre court. The image of Chris is circa 1974. 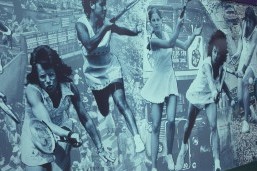 Stamp of the Champion 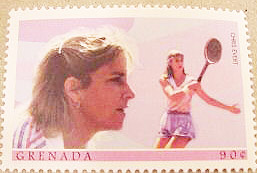 Here are some of the more colorful official Chris Evert wood racquets from the 1970s which were not used in professional play by Evert but endorsed by her for use by young girls learning to play, the ever-popular “Miss Chris” line. 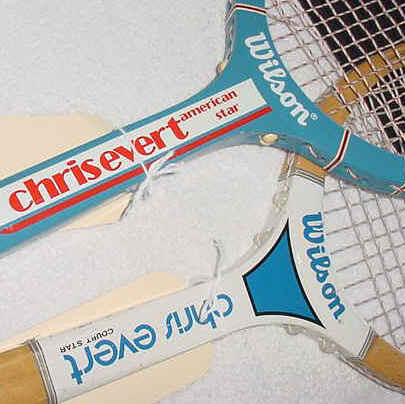 ..A Racquet Made For A Woman.. #GoChris 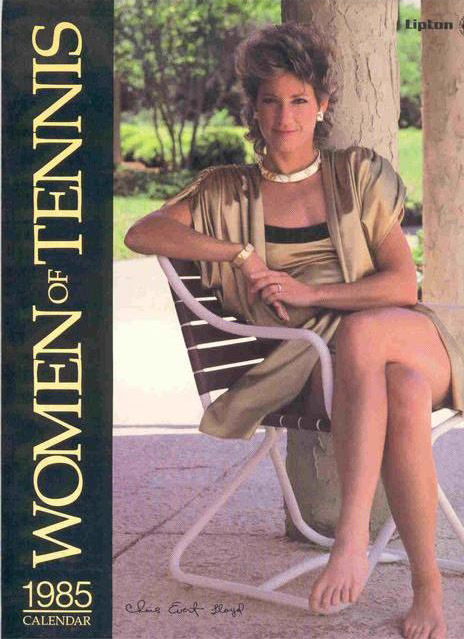 SPECIAL ARTICLE: “In Defense of Billie Jean” written to the newspapers by Chris Evert when the Billie Jean King scandal broke out in 1980 regarding BJK’s sexuality.

Evert, true to form, dealt diplomatically and compassionately with Billie Jean’s situation and chastised the Press while calling on the public for fair treatment of the tennis legend, who had so helped to bring women’s tennis to prominence.

Chris Evert with 14 year old Tracy Austin at Wimbledon 1977. Chris revealed to the press that she had a dream about playing Tracy before the event’s draw was released. Evert won 6-1 6-1 but the intrinsic power of this rivalry was already evident in the mind of the world’s number one player. 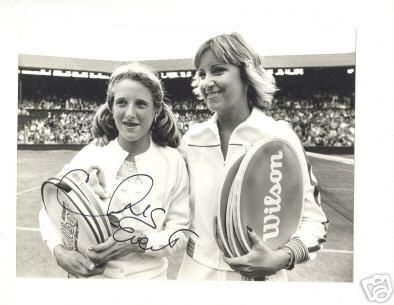 The Converse of Chrissie… 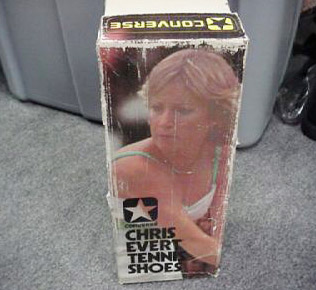 The CONVERSE tennis shoe from the 1970s:

To honor Chrissie for an incredible 1976 season, in which she won the Wimbledon singles, Wimbledon doubles (with Martina Navratilova), the US Open (without dropping a set), and became the first woman tennis player to reach the $1 M mark in career earnings, Sports Illustrated named her Sportswoman of the Year- the first time a woman was ever alone on the cover as the top sportsperson. 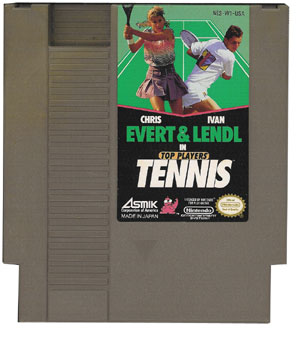 Chris Evert has inspired a lot of things. But this nutty video game where Chrissie Evert takes on the likes of Ivan Lendl became very popular amongst home-video-arcade junkies!!! Chris has been quoted as saying that even at the height of her career, she could not beat the Top 1000th ranked male player, but now…with advancements in technology… she can do so on a regular basis. And you can be the guiding force behind her victories over then-worlds’ number one male player, Ivan Lendl!! #GoChris!

This treasure is still available in used condition on Amazon for just a couple of bucks!! (ie, $2)

A First.. at the International Tennis Hall of Fame 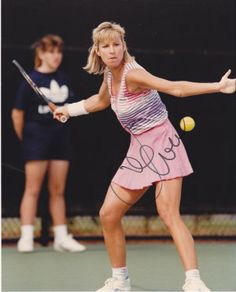 Chris Evert was the International Tennis Hall of Fame ceremony’s lone inductee on Sunday July 16, 1995; the Hall’s 163rd member but only the second player ever to be elected unanimously. In respect of her accomplishments & dedication to the sport, hers was the only name that appeared on the players’ ballot, and nobody was nominated in the contributor’s category. The first to be elected unanimously while also being the sole inductee for the year. 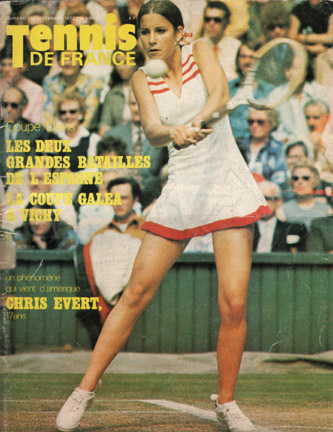