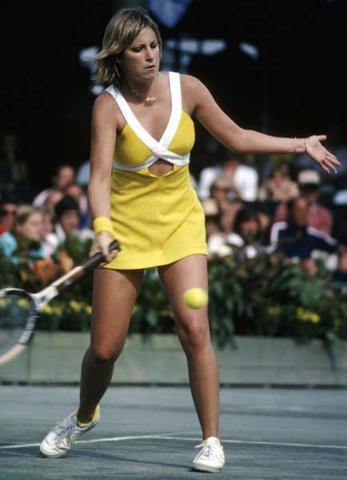 “She’s the most competitive athlete I’ve ever played against, without any question.”
-Billie Jean King, 1987

“She’s been a wonderful champion, a credit to the sport, and a lady. She would have fit nicely into the tennis of Helen Moody’s time, or mine, or probably anytime. She’s a classic.” – Alice Marble, pre-Open-era tennis legend

“Chris brought a lot of femininity to the game with her hair in ribbons and her clothing. I think she influenced the world of tennis more than any other player. You can never take away her place in history.”
-Monica Seles

“Chris had the ability to keep her game at a high level longer than any other champion has.”
-Steve Flink, Tennis Historian & Analyst

“Chrissie was funny off the court but not so funny on the court.”
-Rosie Casals

“Chris is an idol for me. (She) was head and shoulders above the rest, mentally. A champion on and off the court…just a good example for any young girl or boy to emulate.”
-Martina Navratilova

“My favorite woman tennis player..because she’s so consistent on the court, with such good ground strokes, and she never gives points away; the opponent must always win the point against her. We play the same kind of style.”  – Bjorn Borg, 1983

“Perfection is the word that sums her up in almost everything she’s tried to do, on and off the court. It’s an extraordinary record. She’s been such a marvelous ambassador for the sport.”
-John Parsons, London Daily Telegraph

“Chris was the player who brought femininity to the game. A real lady who was always fair.”
-Steffi Graf

“When I think of the young Chrissie, it reminds me of the young Peggy Fleming. Very feminine. Men liked to watch her, girls wanted to be like her. Chris Evert invented the backcourt game that so many players now emulate.”
-Mary Carillo, Sportscaster & Tennis Analyst

“She enjoyed the point. She liked to win, but didn’t want to win too easily. She wanted to work for her victory.”
-Jeanne Evert, sister and hitting partner (Top 10 US player, 1974)

“She was an assassin that dressed just nice and said the right things and meanwhile just cut you to shreds.”
-John McEnroe

“If you can take all the profanity and animation of McEnroe, Connors, and Ilie Nastase (and) put that all into one set of eyes—and she gives you that with one look—it is really powerful.”
-Andy Mill, 2nd husband & Olympic downhill skier 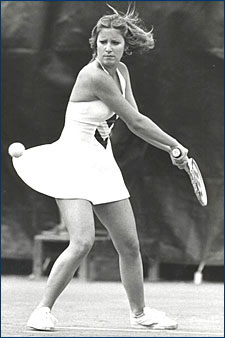 “Certainly nobody in the game, since the war, that I’ve watched, has had more courage.”

“Chris represented the game in a fantastic way. She’s shown a lot of class over the years. She’s won as a champion, she’s lost as a champion.”

“She gave back to the sport more than she took out of it. It wasn’t a requirement but she made it one.”
-Elise Bergen, pro tennis player

“She was gracious in her defeats and never had any excuses. She was really a class act.”
-Colette Evert, mother/tour companion/one-woman cheering section

“As feminine as lace, as smooth as satin, and as durable as pearls. I’ve seen all the champions in tennis for 60 years, and I have absolutely no doubt that Chris was the most gracious of them all.”
–Ted Tinling, star Designer for the Ladies’ Circuit in the 1970s

“I still have a huge crush on her.”
-Burt Reynolds, actor and one time paramour

“Chris had a mental determination that I’ve hardly seen in any other player in my lifetime.” -Jim Matz, Florida Tennis magazine

“I think she’ll be remembered probably with more fondness than maybe anybody.”
-Virginia Wade

“She showed that womanhood is an inside job and that winning is not the only thing vital to a champion’s identity.”
-Dan Patrick, ESPN

“She exudes such grace. She sheds tears when she loses, but never (tears of) disgrace. She’s a true champion.”
-Lee Jackson, WTA Head Chair Umpire

“Not only does she have an unequaled record of consistency in Grand Slam events, but off court she’s demonstrated a responsibility to her sport that is also unequaled.”
-Marty Riessen, US Wightman & Federation Cup captain & coach

“Chrissie was a beautiful woman playing a beautiful sport in a beautiful way. And that’s why America fell in love with her.”
-Tom Friend, Washington Post 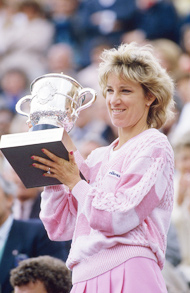 “She is not only the lady champion, but a champion lady.”
–Brian Tobin, International Tennis Federation Vice President

“I feel her essential contribution has been the nurturing of young ladies, so that like Chrissie, they turn instinctively to what is first rate in tennis and in life.”
–George Liddy, Virginia Slims of Florida Tournament Promoter

“She has been the idol of my life and will continue to be.”
–Arantxa Sanchez Vicario

“No one depicts a National Champion – her record, her demeanor, her mere presence – more than Chris.”
–David Markin, President & Chairman on the Board, USTA

“Chris was a ballerina on the tennis court. Very graceful, very elegant, never out of position, always in control.”
-Zina Garrison

“For the crowds at Roland Garros, she is an immortal. Chris holds the all-time record with seven victories. All this achieved with faultless demeanor. Chris Evert will live in our memories forever.”
-Philippe Chatrier, President, International Tennis Federation