The cool unflappable emotionless poise was the Ice, while Maiden was a kind of British double entendre. It referred to the innocence of a young woman but it was also a Scottish term for the early guillotine used for beheadings. This marriage of pretty feminine beauty with Grim Repear-like focus and efficiency defined Evert’s competitive demeanor throughout her career.

Even at the time of her retirement, John McEnroe remarked, “She was an assassin that dressed just nice and said the right things and meanwhile just cut you to shreds.”

Evert was known from early on as “The Ice Maiden” for being so cool under fire when other players melted under the pressure. Evert didn’t question line calls, remained composed, and more important, remained error-free even in the tightest of match situations. In fact, it was when the stakes got higher that she often raised the level of her game and got even better.

In addition, her father and coach, Jimmy Evert, taught Chrissie from an early age not to get upset or show any emotion on court. “It gives your opponent an edge if they can see you’re upset or rattled; it’s a psychological advantage to always seem unphased and to remain cool and in control,” he would tell her. And his daughter was a master at doing just that; masking her inner-self like a good poker player. This trick of not showing any emotion made Chris seem “cool” — but it also instilled fear into the hearts of her opponents, like some secret she was holding onto, but wouldn’t tell you about until after she had won the last point.

But where did this reputation of being “The Ice Maiden” actually come from? It started immediately, from the very first time Chrissie was on national television, at age 16, in the 2nd round of the US Open in 1971. Down 4-6, 5-6, and love-40 to American top ten player Mary Ann Eisel, Chris was already showing tennis audiences that being DOWN never means OUT when the player on one side of the court is named Chris Evert.

Yes, she was three match points down. But then, after Evert powered an unfettered cross-court forehand passing shot to save the second match point against her, commentator Bud Collins of NBC TV remarked, “If somebody around here is nervous, it is NOT Christine Marie Evert.” Then, after Chris saved match point #5, British co-commentator Ann Jones added to the genesis of the Ice Legend by saying, “She looks so cool under these conditions, I don’t know how she manages it.”

But it was after the 6th match point had been saved, the game won, and the tie-breaker ensued that the Ice Legend—which Chris would live with through the first ten years of her playing career—found its roots. As the tie-break began, Bud Collins announced to the electrified national television audience, “The Little Ice Woman from Ft. Lauderdale, Chrissie Evert! …to serve, first point of sudden death.” A Legend was born.

And the commentary went on. “Chrissie Evert cares not for the score, the situation, the drama—She just hits winners!” Collins would say as Chris quickly closed out the match, with another come from behind upset win following in the 3rd round, and another come from behind upset win in the Quarterfinals, before finally being stopped by the #1 seed and eventual champion, Billie Jean King, in the semi-finals. But “Cool Chris” had shown the calm demeanor, intense concentration, pin-point accuracy, and steely courage that would not only shape her into a Great Champion, but one with the highest winning percentage, male or female, in the history of the sport. The reputation followed her to Europe the following summer at Wimbledon where the English press really ran with it, splashing “The Ice Princess” and “The Ice Maiden” across the British tabloids, and there was no turning back.

Ironically, part of what made Evert such a compelling figure (with a charismatic presence that drew attention to the Women’s Tennis game, which back then was firmly respected only as a men’s sport) was Chris Evert’s warmth. She emoted a complex sense of character comprised of an uncorruptable integrity paired with a soft, feminine beauty—in contrast to many other more demonstrative and aggressive lady players the public had become accustomed to seeing. It made her stand out as something new and different, and helped people care about whether Chris won or lost. As a testament to her effect on people, in a worldwide poll taken in the early 80s, Evert was found to be the most recognized athlete (male or female) on the planet, and by the late 80s had her face splashed across a Box of Wheaties for the ‘Breakfast of Champions’ campaign. 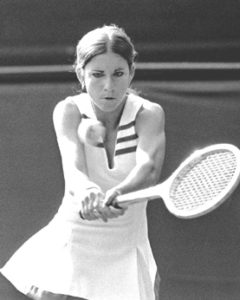 So how much of an Ice Maiden was she? Well, beginning with that 1971 US Open semifinal appearance at age 16, the 16 years of Grand Slam play that followed found Chris all the way to the semifinals or better in 48 of all 49 Grand Slams she entered. Considering that the semifinals are the 6th round into any Grand Slam event, and where all the top players are generally competing, one must consider how remarkable it truly is to have never just had a “bad day”, or to have maybe been sick, or to be simply out-played on any given day by any given player in all that time!

But only once in that 16-year stretch of Slams between the 1971 US Open through the 1987 Wimbledon tournament did that ever happen. (Indeed, Chrissie was visited by a doctor the night prior to her match against Kathy Jordan at the 1983 Wimbledon fortnight for inadvertently taking niacin tablets which had made her ill &  heavily contributing to her one pre-semifinal loss. She was offered the opportunity to push the match back a day, but refused.)

More impressively, she went all the way and succeeded in winning at least one of those Grand Slam titles between 1974 and 1986 for an incredible 13 consecutive years and was also ranked either #1 or #2 at the year’s end every year between 1974 and 1986. In addition to the Slams, Evert made the semifinals or better in 90% of ALL the tournaments she entered during her near-20-year career in an astounding 273 of 303 tournaments. She made it to the finals in 76% of the 303 entered.

That is a consistency of the highest caliber of performance not found in tennis history, or anywhere in all of sports, by any individual or even any team. Highly respected tennis writer Peter Bodo has written that Evert was “a neurological miracle.”

While a fun dirty-joke teller off court, it is her no-nonsense on-court demeanor that still comes to mind when other tennis legends respectfully discuss Chris Evert. After her retirement in 1989, John McEnroe was quoted as saying, “She was an assassin that dressed just nice and said the right things and meanwhile just cut you to shreds.” And more than 10 years after Chris had left professional competition behind, her arch-rival Martina Navratilova still conceded that, of all the players she had faced in her lengthy career, “Chris was head and shoulders above everybody else mentally.” Or as Virginia Wade put it, “Whatever her ranking at any given time, Chris was such an incredible player, I think she was always #1 in my books.”